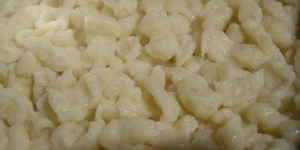 I was born in Mexico and it was an exciting place to grow up!

On Sunday mornings my American born daddy and I would go to the supermarket and do the shopping for the week.   The newly opened supermarket ‘Aurrera,’ was fun and colorful!   There was the “Tortilla” section where women stood behind a large counter, wearing white aprons and white hats to keep their hair in place and out of the food.   They mixed the corn dough, patted it out,  shaped it into circles in the palm of their hands and then placed one by  one next to each other on an enormous hot, flat metal grill.  The delicious smell of those circles as they browned on the edges and puffed up, made my stomach growl.  Magically, they knew exactly when to turn them over for a few instants, and they were ready.   FRESH TORTILLAS!   “Un kilo por favor” I would say.  They weighed out the tortilla stack adding or subtracting one or two and then wrapped them up in a sort of brown butcher paper.

In the car on our way home my dad and I would carefully unseal that butcher paper, we would each take out a still warm tortilla, roll it up in the skinniest roll possible and happily devour it.  When we got home, daddy would put on Sinatra or Mexican Trio Music and we’d put away the groceries to the rhythm of their tunes.

After we’d get everything put away, at around eleven as she did every Sunday, my Jewish, Hungarian grandmother, (my mother’s mother, Lily), would arrive at our house to begin preparing the big Sunday afternoon meal.    My Uncle Mundo – my mother’s little brother  would pick my grandmother up at her downtown apartment and bring her over to our house.

After playing for hours in our yard, I’d get tired and I would go into the kitchen.  I wanted to see what my grandmother (Grema) was making. I would stand on a chair leaning on its back so that I could get a good view of my Grandmother cooking.  I wanted to know how she made nokedli, the most delicious dumplings in the world.  She mixed flour, water,  and salt to just the exact consistency, poured it on a flat plate and holding it like a waiter holding an entrée above his shoulder, with the edge of a wooden spoon, would precisely tip the dish and shave edge after edge of dough into a pot of swiftly boiling salted water.

Lunch in Mexico was at 2 p.m.  After having worked all of her Hungarian know-how into a meal where we ended up with puffy tummies and the remnants of her sauces on the edges of our mouths Grema would be exhausted.

“Lunch is ready”  she’d call out in Hungarian.

On that table in the middle of Mexico City, on a Sunday afternoon in 1962,  there sat, nokedli, those Hungarian dumplings, toltotkaposta, my Grandma’s famous stuffed cabbage, or Hungarian chicken paprikash.  Without fail, on the side, there were  hot tortillas, guacamole, bright green serrano chile peppers, and a shallow bowl filled with fresh cilantro leaves.

Excitedly we’d all sit down to eat to the din and clang of Hungarian, Spanish and English being spoken, with Sinatra playing in the background.

This was life from the very beginning, a melding of old country recipes with the staples of our new home.