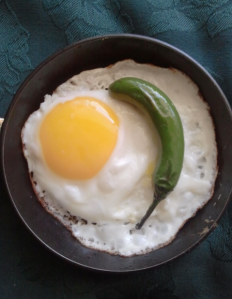 When I was little I didn’t know about chili peppers. I only knew that I wasn’t allowed to eat those long and skinny green things that prettily decorated the white of my mother’s daily Sunny Side Up egg. Our housekeeper would pour a little bit of oil into a small frying pan. When the oil was very hot she would drop in one Serrano chili pepper. She would stir it around the spattering oil and as the skin of the pepper began to bubble she would crack the egg into the pan, she’d let it fry until the edges became crisp but the yolk was still liquid and then she would take the egg out of the pan, just the way my mother liked it.

In Mexico, eating Chile was almost a test of character. You weren’t really Mexican unless you ate everything with a chili pepper or a salsa that turned your mouth into a molten lava pit. One day, when I was about 6 years old, my two older brothers, Dickie and Gary, took me aside, and dangled a fresh serrano chili pepper just above my forehead. They said, “Susie, if you eat this chili pepper we’ll give you a peso.” Not knowing what I was in for, I said, “For a peso, I’ll do it.” I took the chili pepper, bit it off at the stem and started chewing. Immediately my tongue was on fire and then my ears got so hot they felt as if they would explode. Teary-eyed, I complained to my brothers that I needed to spit the chili out. They said that if I did, they wouldn’t give me the peso. I tried so hard to keep from spitting it out, but when my eardrums began to pound louder than my heart, I spat out that wad of green chewed up fire right onto the floor next to them. Laughing, they said, “Now you don’t get the peso, you’re just a little baby who can’t take any “pica” (spiciness). “That’s not fair,” I cried. “I went through all the pain now give me my peso.” “No” they said. “The deal was that you had to swallow it, and you didn’t. No peso for you.” They went off laughing as I ran to the kitchen to nurse my injured mouth.

I was initiated at a young a age by my brothers, and still, nowadays, more than 50 years later, I love my spicy chili peppers and my spicy salsas…actually when I don’t have something spicy to accompany my meals with, life is just a little bland…thank you Dickie and Gary!