I felt very safe and happy as a young child in Mexico City.    In front of our sweet little house on Amatepec Street in Las Lomas, we had huge green bushes filled with large yellow daisies. We had a white picket fence, where my brothers would climb in between the wooden slats, and where I attempted to follow.  Dickie and Gary always wore their little brown leather cowboy hats, and their toy guns in their holsters.  They would climb and then straddle the fence, pretending to be on their friendly and loyal horsies.  They’d aim their toy guns, and shoot at each other, then they’d fall to the ground gravely wounded.  I would watch wide-eyed and laugh with relief to see that they were only pretending.

I always  wanted to do everything that my  big brothers did.  I tried to keep up with them but I always remained a step behind.  By the time I learned to play the game of the moment, like “No pisar suelo”  (Don’t step on the Floor) they no longer had an interest in playing the game, especially not with me.  That game was so much fun!  We would make trails (and a mess) all over the house with newspapers or any other paper we’d find. We’d put it over and up on counters and even on the furniture.  The first one to step off of the trail was out.  I was always the first one out.

Because my brothers had no interest in having me tag along with them, early on I sought out friends to play with.

Just up the street from our house, on Monte Ararat Street lived the Unzueta family.  They had 3 boys and one girl.  Lizzie was 2 years older than me and we went to different schools, but we became the best of friends. After school I’d hurry up to finish lunch, so that I could run up and play at Lizzie’s.  We would sit for what seemed like hours on the side steps outside her house, with her fat Basset Hound Maggie, sprawled out next to us in the sun.  We’d talk and giggle and pass the hours.  She had only brothers and I had only brothers, so we became each others’ sister.

One of the great features of hanging out at Lizzie’s was waiting for the Coca-Cola delivery truck to arrive and unload its cargo of the dark sweet liquid whose bottles sat firmly in their  faded yellow, thick wooden crates.  We watched the strong Coca-Cola man as he brought in crate after crate placing each by Lizzie’s daddy’s bar, next to the living room. 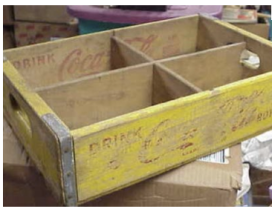 Yes Lizzie’s family was allowed to drink Coca-Cola!  We weren’t!   And the Unzueta’s had the most up to date cars and T.V.’s.  On Wednesday nights Lizzie and I would sit and watch Richard Chamberlain as Dr. Kildare, whom I found myself later daydreaming about.  He was the most handsome person I had ever seen…yes,  at Lizzie’s house I learned the meaning of a first crush.

But the greatest time of all was February 9th 1964.  Lizzie and I were watching the Ed Sullivan Show and the new musical group The Beatles came on  the television.  Lizzie and I sat in stunned silence.  We didn’t know what had just hit us, we only knew that it was the greatest thing that had ever happened to us!   Those were my Mexico days.