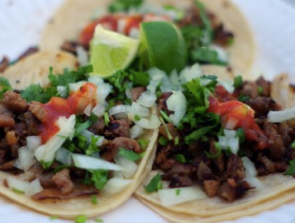 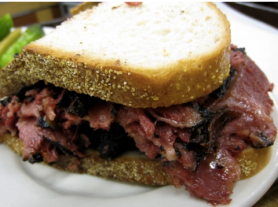 “Susie” my mom said to me, “Vamos a taquear. Let’s go get some great tacos, who knows when we’ll be able to get a good taco next?”  I was always my mom’s willing companion, so we happily went off to eat the best meal in the world — the fresh tacos at the stands by the university (we didn’t keep kosher in those days).  We happily smothered our tacos in spicy sauces and topped them off with mountains of cilantro and onions.

That was on the eve of December 4, 1964, the day my mother and I caught the last flight of the day from Mexico City to Los Angeles.  The only places I had ever been outside of Mexico City were Acapulco and Cuernavaca.  I didn’t want to leave Mexico, but I was only eleven and a half and I had no say in where I was to live.

I carried with me my most precious possessions.  In one hand I had the real looking baby doll on whom I had once performed surgery to see exactly how she made that crying sound.  After the surgery, she never cried again and still bore the old scar.  In my other hand I held my favorite stuffed animal — a small, light brown squirrel.  My squirrel held a bouquet of flowers in its paw.  The flowers were really miniature colorful light bulbs that lit up when you squeezed the squirrel’s tail.  Every night after my mother tucked me in and turned off the light, I would pull the covers up over my head and light up my little squirrel.  It was cozy and safe under there.

On the plane, I felt so lucky to be sitting by the window.  Once we were high in the air, I asked my mother if I could open the window;  I really thought you could.  The excitement of being on an airplane and the prospect that our family would soon be together again made me forget, for a while, that I was leaving my home forever.  The place where I was born would now be far away from me.

The L. A. Airport was so big and clean. Even the air had a different scent.  The buzzing sound of English all around me was new and strange.  I did speak some English because my father was born in New York, and had spoken it to us as we were growing up, but I wasn’t used to it being spoken all around me.

“There they are,” I screamed as I spotted my father and two brothers.  We all hugged each other, we cried and cried, then we laughed and cried again.  As we walked to the exit we all clung to each other, never again wanting to let go. We had been separated so long.

Six months before, after loading his and my brothers’ suitcases into the car, my father filled the rest of the small black Renault Dauphine with the ladies’ leather handbags he had left over after closing his factory.  I cried as I stood there with my mother, watching my father slowly back out, and sadly wave goodbye.  He drove away and headed north for the border, and a new life in Los Angeles.

Back at the airport, we all said we were starving.   My father said he knew of a great delicatessen.  I had never heard the word before.  He took us straight to Canter’s on Fairfax Avenue.  I saw things on the menu that were considered gourmet because there were very few, if any places in Mexico that served lox, bagels and cream cheese, chopped liver, gefilte fish or herring, or pastrami or corned beef sandwiches.  My family loved these foods just as much as we loved a great taco, albeit in a completely different and unique category.

I was amazed when our server spoke to us in English.  As she walked away after taking our order, I turned to my mother and said, “Hasta las meseras hablan ingles?” Even the waitresses speak English?  My parents lovingly chuckled at my innocence.

This was my Mexican-Jewish cultural crash landing when I first arrived in L.A.  47 years ago.  I was in for a long adjustment period…about 3 years.