A great irony of death is that it brings family to life.​

At the age of 92, on December 26, 2016, my dear Mother-in-law, Dora Schmidt, passed away in her sleep. Dora taught me, among other things, about the wealth of our Jewish heritage, and about the imperative of preserving that heritage through the education of our children.  In her youth Dora was a busy mother who incessantly cooked for her 6 children and opened her door and her table to all of their friends. As a grandmother and great-grandmother she continued to express her love of family through her cooking, especially for the weekly Shabbat meal.

Dora Nedvedovich was born on the Shtetl of Kolno, in Poland, in 1924.  Her family  emigrated  and settled in Mexico City when she was about 3 years old.  She was the daughter of a loving, hard working and observant mother, and a father who was a learned and well respected Torah scholar.   Right there in the heart of downtown Mexico City, Dora grew up speaking Yiddish and Spanish, observing the Sabbath, and celebrating the Jewish holidays along with her parents, her sister and her two brothers, as they had on the Shtetl itself.

Just a few months ago Dora still lit Shabbat candles.  Lighting the candles week in and week out was a lifelong priority for her.

My husband Isaac, our 5 children, our son-in-law, our daughter-in-law, our baby granddaughter, and I,  traveled to Mexico City to attend Dora’s funeral and to sit Shiva.

As adults, Isaac and his five siblings had dispersed, and lived at long distances from one another.  It was the loss of their beloved mother that brought them together once again. During the 7 day mourning period, Isaac sat with his four brothers and one sister, and reconnected with them in a way that can only happen in this very unique circumstance.  They cried, they laughed, they told anecdotes…they  briefly relived their childhood.  The depth of the experience could be palpated by a passing expression or a heartfelt look

On one of the Shiva days it was suggested that we all get together for a Schmidt family reunion.  Thanks to two of Dora’s granddaughters (Alex and Mijal) this idea was brought to fruition 10 days ago, when 25 of us traveled to Puerto Escondido, Oaxaca for a grand reunion indeed.

We rented what could be described as a compound with separate villas for each couple or family. We had cooks on staff who prepared our meals, from the freshest of juices and fruits, to eggs Mexican style each morning, to fresh fish ceviche and grilled fish on a daily basis for lunch, along with tasty side dishes, fresh tortillas and a variety of the spiciest of salsas.  We played, laughed, and reminisced.

There were moments of quiet  awe at the realization that our family had evolved. The older generation had passed away, the new generation had slipped into the new old generation, and a newer generation yet, had come stealthily and joyfully upon us. 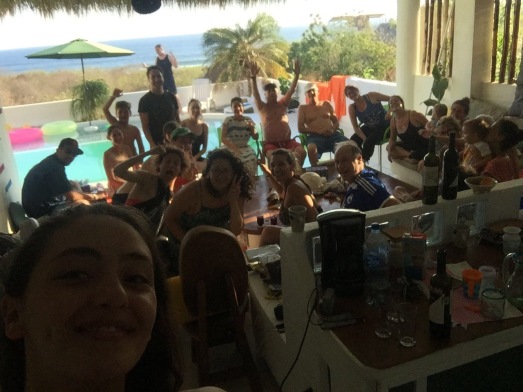 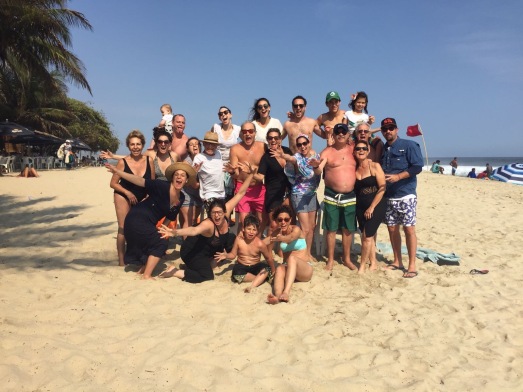 The presence of each and every one of us made the totality of our reunion more than the sum of its parts.  Anita printed copies of Dora’s recipes and created packets that she handed out to all of us.  Isaac led the Kiddish and I baked and transported 4 challahs for the Friday night meal, which came after the lighting of Shabbat candles.

Isaac sat in the pool with his brothers, and all of the kids for hours, talking, laughing, playing and joking. Aaron invented a game where everyone took turns jumping into lifesavers from the pool’s edge.  We had the opportunity to have heartfelt conversations between siblings, sisters and brothers-in-law, cousins, aunts and uncles, nieces and nephews, children and parents, and parents and children.   Alex and Mijal planned the logistics including transportation and day trips, and an underwater bioluminescence adventure.  Along with Dovi they took care of all of the accounting and the planning of meals.

One day they brought in two masseuses and we all had oceanfront massages.  Noa, Alex, Anita and others took part in what seemed to be a dance contest. providing infinite laughter and fun. And in the evening we went up to Amy and Anita’s suite where we watched and then applauded the magnificent sunset.

Our farewell dinner was memorable, we made toasts and drank Mescal, and vowed to meet again soon. Desiring for time to slow down we then walked inseparably through the small town looking over all of the stands and buying small souvenirs.

​The time spent together was pure gold, no, actually a value could not even be ascribed to our reunion.  9 year old Jack expressed it best when he verbalized his wish to travel back in time so that the family togetherness would never end. I think we all felt the same way.

From generation to generation, now in the absence of Dora and the rest of our parents, we became the grandparents.  In our new role, we experienced the joy of time spent with those we love and cherish most.  Yet time marched on, like grains of sand slipping through our fingers, the moments fled and what moments they were…

The newest of the new generation, my precious granddaughter Orly: